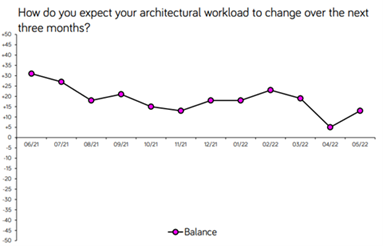 RIBA report shows bounce back in expectations of future workloads

RIBA’s latest Future Trends survey has found that expectations of future workloads has jumped an index figure of eight points in May, despite many fearing that the UK economy is heading for recession. The report shows a reversal of a trend of declining optimism and demonstrates an increase in confidence in comparison to  architectural practices in April’s Future Trends survey which showed the sharpest decline in workload expectations since the early days of the pandemic.

The ONS reported that the UK economy shrank for two months in a row since the start of the Covid pandemic and CBI director-general Tony Danker warned that the economy is likely to be “stagnant” in the months ahead. But, architects, who are a good indicator of new projects in the construction sector in general, have confidence. The mood appears to be getting brighter across most of the UK, with the Midlands and East Anglia being the only region which saw confidence reduce.

London reports an increase in confidence, which rose to a balance figure of +22 in May, that was after three months of declining optimism. Wales, West and the North of England remain upbeat about the future. The South of England has bounced back after a negative report last month. And, recruitment among practices is on the up too! Ok, it’s a small increase of just one point in May, but that follows a four point drop in April!

Adrian Malleson, RIBA head of economic research and analysis said: “Practices remain resilient, but the profession continues to face headwinds, and we can expect the coming months to be challenging for architects, the construction industry, and the wider economy.”